This article by Tom Simon is a sequel to Ozamataz and first appeared on Bondwine. 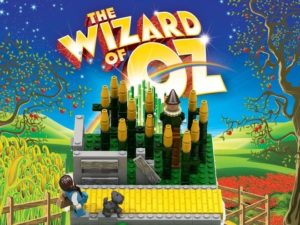 So far, I have described my thoughts about ozamataz up to the point where I asked whether one could attract that kind of self-sustaining fan participation, and if so, how. This is also the point at which the Muse, or the Guardian Angel, or the Collective Subconscious, or Something, stepped in. Perhaps it was the Great Oz himself.

Having worked out something of the nature of ozamataz, I asked my brain: ‘OK, brain, what is it that makes some things have ozamataz when others don’t?’

And my brain, without missing a beat, obligingly answered: ‘Legosity.’

I was duly annoyed, for I then had to figure out what legosity was. My brain is cryptic and has no manners, and seldom troubles to explain itself.

The one thing my brain did deign to tell me is that legosity has something to do with Lego. This made sense on the face of it. Lego toys have an ozamataz of their own. They have inspired movies, games, theme parks, and of course, the imaginations of millions of children the world over. The manufacturer’s recent habit of producing specific single-purpose Lego sets like model kits, which hardly fit together with other Lego and are hardly intended to, is most regrettable. These kits tend to take up shelf space at the toy shops and displace the kind of Lego that you can really play with. But the original bricks and doors and windows, Lego people and Lego cars and Lego trees, and so on – those are still available, and you can do anything with them. Nowadays, you can even buy Lego with moving parts and electric motors, and build Lego machines that can be controlled via computer. There are Lego robots in the world, and serious men with doctorates in the hard sciences have been known to play with them. 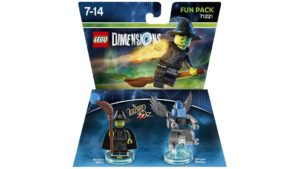 As the unfortunate history of the kit-model kind of Lego shows, it is not so much the brand name, or even the mechanical ingenuity of Lego that gives the toys their unique quality. It is the concept. At bottom, Lego consists of a whole range of bits and pieces, all designed to fit together easily and without fuss, so that they can be used to build anything the imagination can conceive. You do not have to be a skilled carpenter, or a watchmaker, or know how to build ships in bottles, to build houses and cities and fairy castles out of Lego. The skill in your fingers (especially a child’s fingers) ceases to be a limit on what you can achieve, and the mind is set free to soar.

Even the name Lego is well chosen, and means, I think, more than its inventor intended. We are assured that it comes from the Danish phrase leg godt, ‘Play well’. But it is also Latin and Greek, and in those languages the word has a wide and subtle range of meanings that reach right down into the guts of the human psyche.

In classical Greek, λέγω means ‘I put in order, I arrange, I gather’: which are certainly things that you do with Lego, and indeed with any toy worth having. It also means ‘I choose, I count, I reckon’: the basic methods by which the creative process works on the raw materials furnished by the imagination. It means ‘I say, I speak,’ and even ‘I mean’. And – most important of all, for our present purpose – it means ‘I tell a story’.

Stories, in whatever medium, are more complex than toy bricks, for they have extension in time as well as (imagined) space. They move, within their own confines, or they do not exist at all. But the tropes and elements and imaginative bits and pieces that go into a story function very much like Lego bricks. You can spend years of your life inventing a monster that will metaphorically express the horror of death and the fear of lost identity; or you can dip into the barrel of Lego bits and fish out a ghost, a zombie, or the vampire’s enslaved and unwilling bride. Every story ever written, probably, uses some of this conceptual Lego; for some of the pieces are older than writing itself.

If I wanted to make up a bogus etymology for legosity, I would pretend that it did not come from Lego at all. I would choose the Latin form, lego, which means ‘I choose’, and ‘I gather’, and also ‘I read’ (originally in the sense of reading aloud). I would make up an adjective legosus, which would mean ‘well-chosen’ and also ‘worth reading’; from which one naturally gets the abstract noun legositas, which goes into English as legosity – and there you are. But I shall not dissemble. I got the word from my brain, and my brain got it from Lego.

Legosity, then, is the quality that makes an idea go easily into stories. Things that have legosity tend to connect together easily, like Lego bricks. They are adaptable and reusable; their play-value is not exhausted in one telling. There are thousands of stories about Robin Hood, and tens of thousands about vampires. Kings and queens, heroes and villains, monsters, perils, and things of nameless dread: these are some of the simple bricks that have gone into stories from time immemorial. They are conceptual Lego, and they are free for anybody to use. 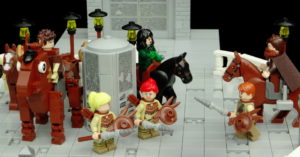 Because they are free, they are taken for granted; because they are not original, they are not striking. They don’t contribute to any story’s ozamataz. The Wheel of Time contains barrels of conceptual Lego, swiped or stolen or recycled from every great story-cycle known to Western man: which, I believe, was the author’s intention. But it has precious little originality. When you take it apart to play with the pieces, you find that all the pieces are somebody else’s. From Dune, you have the secret magic sisterhood that controls the fates of families and nations, the Bene Gesserit (renamed Aes Sedai); and the shockingly male creature that sets the world on its ear by having access to the magic and ignoring the sisterhood, the Kwisatz Haderach (renamed Dragon Reborn); and the wild desert-dwelling people who have a hard-won lore of their own, with whom nobody can tangle and not regret it – the Fremen (renamed Aiel). From Tolkien – well, the very first page of Jordan’s interminable saga mentions ‘the Third Age’ and ‘the Mountains of Mist’, and if that isn’t straight-up theft with the serial numbers left in blatant sight, I don’t know what it is. Nobody writes Wheel of Time fan fiction – at least none worth speaking of – for The Wheel of Time is itself fan fiction, in which all the fandoms collide together.

The works or franchises that I mentioned earlier, the ones that have long-lived and fruitful fandoms – the ones, as I put it, with ozamataz – all have this in common: they have original toys. They contribute new conceptual Lego to the barrel. ‘Who can invent a new leaf, or a new story?’ Tolkien asked – and then answered his own question, by inventing a whole botanical garden of new leaves, and resurrecting old ones that had been forgotten since the Middle Ages. It is this quality of primary invention – the new ideas, the new toys – that I shall refer to as ‘legosity’ hereafter. And I shall refer to the ideas or toys themselves as lego, with a small L, to distinguish them from the (trademarked) building toys.

The Wonderful Wizard of Oz, which has had ozamataz for more than a century, has this kind of legosity in abundance. Everybody in our culture knows the story of Goldilocks and the Three Bears; but few people know that the Three Bears were invented less than two hundred years ago by Robert Southey, or that Goldilocks was added to the tale at a later date (to its great improvement). Everybody knows the legos of the first Oz book; and everybody attributes them. The Scarecrow, the Tin Man, the Cowardly Lion; the Good Witches of the North and South, the Wicked Witches of the West and East; the Silver Shoes (which became Ruby Slippers in the movie, the better to show off in Technicolor); the Yellow Brick Road, the Emerald City, the Munchkins, the Land of Oz, and of course, the Wizard himself, hiding behind a curtain while he dazzles the world with special effects – all these things are part of our popular culture, and we know exactly where they came from.

You can go through each one of the works or franchises that I listed in ‘Ozamataz’, and identify the bits that give each one its legosity. When I perform this exercise, I find myself marvelling at the sheer richness of our storytelling heritage – the vast and delightful variety of legos that our imaginations have to play with. So—

From the original Doctor Who: Timelords and the TARDIS; regeneration; sonic screwdrivers; the Daleks, Cybermen, Silurians, Sontarans; the Blinovitch Limitation Effect, which is narratively important, because it sets boundaries on the kinds of paradoxes that so many time-travel stories have snarled themselves up in.

From Star Wars (the first film only): Darth Vader, droids, Jedi Knights, light sabres, Storm Troopers, the Millennium Falcon, the Death Star, jawas, dogfights in space, the Force, and of course Mos Eisley, the ‘wretched hive of scum and villainy’, of which the cantina was merely the most theatrical part.

From The Hobbit (leaving aside The Lord of the Rings): hobbits; Gandalf; Thror’s Map, with its runes and key; the Stone-trolls; Elrond Half-elven and the Last Homely House; orcs and the Great Goblin; Beorn the skin-changer, the Eagles, the Wood-elves; Mirkwood, Lake-town, the Lonely Mountain; and of course Smaug the Magnificent, Chiefest of Calamities.

You can, I am sure, make lists of your own, from the fandoms you participate in, and from things you know to have ozamataz; and they will probably bear a fair resemblance to the five I have given.