The Battle Is Not Yours…

There are times when we feel as if nothing we attempt will ever succeed.

We write books we feel God calls us to write…but they don’t sell.

We vote for people we feel God has endorsed…but they don’t win.

We pray for things we need desperately in our lives…but our prayers are not answered.

At this point, it would be very easy to surrender. Nothing works, why bother?

One of my favorite series has the very annoying quality that the main character gets beaten up in every arc before he gets back on his feet, endures much, and finally wins. It is so frustrating! The struggle goes on for so long! Why can’t he win already! I shout at the screen, gritting my teeth with frustration!

Because the first time, it was my false expectations that frustrated me.

I thought I knew how long the suffering should go on before the victory. But, you know, the real story was much better, the victory much more dramatic, than it would have been if the story had followed my expectation.

Some of my favorite authors were never famous in their lifetime. Milton is said to have made ten pounds on Paradise Lost. They may have gained little benefit in life from their work, but their work changed my life.

What if they had given up because it seemed that they weren’t getting anywhere? Where would I be today? Where would the hundreds or thousands of others whose lives were shaped by them be?

The same is true of us.

How do we know? Because God has promised us:

Thus saith the LORD; Refrain thy voice from weeping,
and thine eyes from tears: for thy work shall be rewarded

But perhaps you are thinking: it’s all very well that God might use my efforts to help somebody five suprafillion years from now, but why can’t I see even a sliver of victory?

Well, maybe you can. 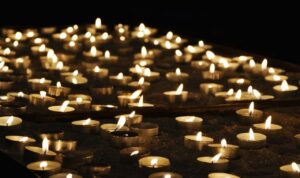 We don’t know now what victory will look like. We may look up and see only storm clouds on the horizon, dark, terrifying thunderheads that hide the light.

At moments like these, it is important to recall the life of King Jehoshaphat.

Jehoshaphat was outnumbered. He was being attacked by not one but two larger armies. There was very little that the Hebrews could do against such multitudes.

So he inquired of the Man of God what to do and was told to pray and sing hymns. The soldiers gathered. They went out. They stood on the battlefield as the two armies approached, and they sang hymns. Didn’t fight. Didn’t draw weapons. Sang hymns.

For God told them:

Be not afraid nor dismayed by reason of this great multitude;
for the battle is not yours, but God’s.

A fog came up. The two attacking armies became confused and fought each other. The Hebrews waited until they were done, looted the fallen and took their stuff.

Jehoshaphat is not the only one who was delivered from having to fight a battle he could not win in the Bible. When Moses and his people were surrounded by Egyptian warriors, the Red Sea parted for them but swallowed their enemies.

When his protégé Joshua faced the impenetrable walls of Jericho, marching, praying, and shouting brought them tumbling down.

When Gideon and the people of his time were surrounded by the massive army of the Midionites, God led him to bring a mere 300 men. With nothing but pots, lamps, and trumpets, they routed the entire army.

And Elisha? He routed two armies, all by himself. Really, he did. The first time he prayed, and his servant lad could see chariots of fire all around him. Then he blinded the army and led them back to his king. When the king asked if he should slay them, he said, “No. Feed them and send them home.” He did, and they never came back.

The second time, there was an army round about them, and the city was starving. Elisha announced there would be plentiful grain the next day. Sure enough, the next day, the whole besieging army had fled–leaving their food behind. And grain was plentiful again.

And then there was David who, in addition to killing a giant with a stone and a sling, escaped from King Saul over and over again, while never laying a finger upon him because Saul was his legitimate king.

If God can do this for all of them, he can do it for you, too.

When you begin to lose heart, remember:

Fear thou not;
for I am with thee:
be not dismayed;
for I am thy God:
I will strengthen thee;
yea, I will help thee; yea,
I will uphold thee with
the right hand of my righteousness.

I will lift up mine eyes unto the hills, from whence cometh my help.
My help cometh from the LORD, which made heaven and earth.
(Psalms 121:1, 2)

Finally, I will close with the beginning of a favorite poem. This poem was broadcast by the King of England for Christmas in 1939. When his wife died in 2002, it was read again at her funeral. The poem, written by Minnie Louise Haskins, is officially called “God knows” but it is known by the title “The Gate of the Year.”

When the future looks dark, storm clouds are brewing, and you know not what will come, remember this: 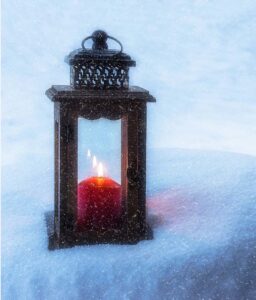 The Gate of the Year

And I said to the man who
stood at the gate of the year:
“Give me a light that
I may tread safely into the unknown.”

And he replied:
“Go out into the darkness
and put your hand into the Hand of God.
That shall be to you better than light
and safer than a known way.”