This post from another blog is on a similar subject to the early Superversive blog post The Goals of the Superversive. The article is also available on audio on the original site.

Of Mice and Men Without Chests 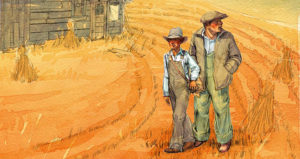 At first glance one might surmise that the title of this article alludes to the characters in John Steinbeck’s classic. Truthfully, while reading Of Mice and Men I grew to like the characters and found myself empathizing with some of their hardships. A good author is able to pull his readers into the world of his characters. While C.S. Lewis’s metaphor “men without chests” could be ascribed to the characters in Of Mice and Men, a more critical concern at hand is the impression the novel has made on young readers for more than a half-century. What has been their take-away? How has this short, yet harrowing, novella affected the hearts and minds of readers and our overall culture? Why does it continue to be one of the most popular required reading selections in middle schools and high schools across America?

In case you are not familiar with Of Mice and Men the story concludes with an act that has been described as “mercy killing.” One of the main characters, Lennie, a mentally disabled man who is like a big, clumsy, guileless teddy bear unaware of his own physical strength, accidentally breaks the neck of a young woman—who happens to be his boss’s daughter-in-law—on the ranch where he is living and working. George, Lennie’s closest friend and caretaker, finds the body and after some deliberation with his friend Candy, decides to shoot Lennie in the back of the head since the deceased woman’s husband and other men were coming to kill him. What’s also implied is that George wished to spare him from what he feared would be either a brutal death or a life of imprisonment and suffering.

I do not wish to presume Mr. Steinbeck’s intentions when he penned Of Mice and Men. The purpose of this article is not to focus on the author or characters in his novel per se, but on the culture we have created, which has ensued, in large part, from what we put into our minds.

St. John Paul II’s 1995 Encyclical Evangelium Vitae (The Gospel of Life) warns of an emerging culture “actively fostered by powerful cultural, economic and political currents which encourage an idea of society excessively concerned with efficiency.” He alerts us further to “a culture which denies solidarity and in many cases takes the form of a veritable ‘culture of death.’” In Pope Francis’s recent apostolic exhortation, Gaudete et exsultate (Rejoice and be glad) he expresses grave concern for “the vulnerable infirm and elderly exposed to covert euthanasia” and “the dignity of a human life, which is always sacred and demands love for each person, regardless of his or her stage of development.”

Presently, 68 percent of Americans believe in physician-assisted suicide (up 10 percentage points from last year), now legal in seven states. The Down Syndrome abortion rate has increased to over 90 percent in Iceland, Denmark, and Australia, prompting Special Olympian Frank Stephens to speak out in defense of his life. Interesting that the character Lennie in Of Mice and Men was mentally and physically challenged.

Recently little Alfie Evans lost the battle for his life since the British High Court ruled he should be taken off life support. Despite the fact that he was granted Italian citizenship and offered treatment at Vatican-owned Bambino Gesu Pediatric Hospital, the judge ruled, “this would not be in his best interest.”

Perhaps some responsibility for our culture of death lies not only in our selection of literature but also in how less-than-ideal literature (or what many consider to be less-than-ideal) is taught. A book that appears to oppose meritorious ideals can also be used to champion them. There is a flip side to every story. For example, a teacher could pose the following questions to her students:

When you take someone’s fate into your own hands you are haunted by the “what ifs” for the rest of your life. It’s doubtful that the modern day teacher would be so inclined to seize such an ideal opportunity to open up a discussion on morality. Her potential loss of a job in this politically correct climate in our schools precludes her from doing so. Nevertheless, questions should be presented to encourage students to think outside the box of secular relativism and venture into the infinite beyond.

One thought on “Of Mice and Men Without Chests”