Part One: We Live in a Fairytale
Part Two: Descent into Darkness
Part Three: The Wood that is Perilous 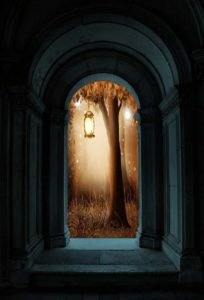 You live in a fairy tale. What fairytale? For that, you shall have to read the first part of this series on Defending The Wood Perilous, which you can find here. The second part explains why the Wood Perilous needs defending. The third part discusses what it is about fairy tales that make them perilous to the forces of modernity.

Part Four:  A Disgrace to the Forces of Evil!

Heroism is so deadly to the Degenerati [those partaking in the degenerate forces of modernity] that even villains cannot be majestic. In many of these stories, only the bad and tawdry things were exalted. True villainy, of the majestic kind, was also banished. 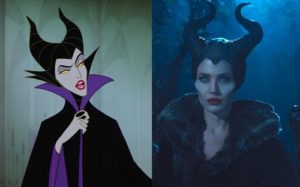 Notice how one is snide and confident, while the other looks teary-eyed and weak.

If you search for Malificent, both these ladies show up, but only the original version of Malificent shows up if you search for one of her most famous quotes: “Now shall you deal with ME, O Prince, and all the powers of Hell!”

There’s a reason for that.

Both these women may share the same malicious and magnificent name, but only one of them deserves it. 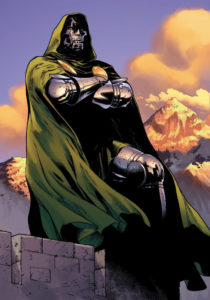 Victor Von Doom does not approve.

To those of us whose eyes are not blinded by the putrid bile that fills the eyes of the Degenerati, villainy seems, well, vile. An impressive bad guy is still a bad guy, and bad guys are bad. And so we see them, whether they are wimpy villains or majestic villains OF DOOM!

What do I mean by majestic? Imagine an enormous, black, basalt fortress stretching as far as the eye can see. It is vast and impregnable, with arrow slits and crenelations. And atop those, crenelations, a man stands calm, imperious, implacable–and set upon your destruction. Nothing sways him. Nothing disturbs him. He speaks a word and a hundred, thousand, million minions all jump into action to obey him.

Those of us not yet blinded by darkness often prefer our villains majestic. But to those whose hearts have been corrupted, majesty itself is despised.

In fact, nothing is awe-inspiring at all.

When Canadian psychologist and professor Jordan Peterson lectures about the nature of stories, he often returns to the story of Pinocchio. He sees Pinocchio’s transformation from doll to real boy as a symbol of the transformation we all yearn to go through, but this is not the part of the story he talks about the most. What stands out to him is the opening, in which a sweet and good man, who is kind to others, looks up at a star and yearns for a son. 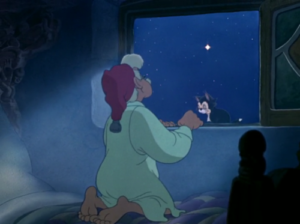 Geppetto and Figaro wishing upon a star.

More than once, he has paused to emphasize how good a person Geppetto is in the tale, how kind and generous and unselfish.

In the graphic novel series Fables, fairytale beings flooded into our world, fleeing some dire danger in their own. As they arrived, they were clearly tainted by our air, because by the time they reached the city the more noble characters had become cads and the Big Bad Wolf had become a hero.

After a time, however, the characters regrouped and decided to try to find out what was happening back home. One of the questions that reverberated throughout this period was: who was behind the terrible events in their home world? 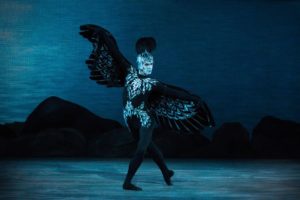 Von Rothbart — wicked, conniving, and he can dance!

The author of Fables had many impressive villains to choose from. Might it be the insidious Von Rothbart whose cunningly disguises his daughter Odile as the lovely Odette in order to beguile the prince and drive Odette to her death?

Or the witch from Hansel and Gretle who cackles while she eats children?

Might it be the wicked fairy from Sleeping Beauty, whom Disney made so impressive that she can call upon all the powers of Hell?

Or the ice-cold Snow Queen who can, with a shard of her mirror, turn a boy’s heart to ice?

OR the Pied Piper, who steals the town’s children when they won’t pay him for ridding them of rats?

Or the Rat King himself, the vile three-headed opponent of the Nutcracker prince? 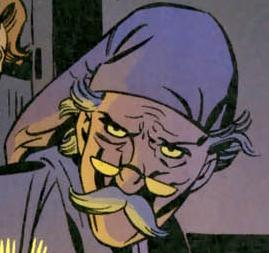 Evil Geppetto and his evil…night cap?

He might have chosen any of these to be the villain worthy of his many heroes and heroine, but he didn’t. The villain behind the calamity in Fables was an evil…Geppetto.

It is not enough to have an evil snow queen or rat king, the good little man who was kind and loving must be warped beyond recognition into something vile, lest the villain be anyone who we might accidentally admire.

Disney cartoons feature many fine villains, but none stand out for their force and majesty as much as Malificent, the wicked fairy who is so angry that she has been slighted at a christening that she curses the family and tries to kill the child. 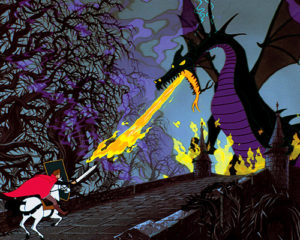 “And all the powers of Hell!”

Malificent is impressive. She is funny. She curses an innocent child, just because she is miffed. When, sixteen years later, she leanrs that her minions, goblins and gargoyls,  are still looking in cradles for a missing baby– instead of a young lady who has grown up–Malificent utters her eerie, silvery, laugh. Then she blasts them with a lightning bolt from her magic wand and declares:

“Oh, they’re hopeless. A disgrace to the forces of evil!”

But Malificent herself is no disgrace. When it comes time to fight the prince she turns into a gigantic dragon and calls up on the most infernal forces of all.

This gives her a majesty that fits with the evil magnificence of her name. She was spectacular in her villainy.

Too spectacular for the Degenerati, apparently.

In the original Sleeping Beauty – in some ways the most beautiful of all the Disney cartoons – the backdrops were done by a well-known painter. ( I used to sell his works when I worked at a gallery.) – Malificent curses king Stephan, a man who is both a kind king and a loving husband and father. His only crime is that he left the evil fairy off his guest list. He is good, and he is innocent. The horror that befalls his nation is appalling, and he is undeserving of this terrible fate. 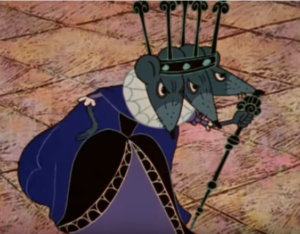 The Rat King — formidable and has three heads!

In the recent movie about a being who happens to have a similar look and name to our magnificent villainess, the main character, Faux-Malificent, is not majestic.  She is weak and innocent. She falls in love with a man, and this dastardly individual betrays her sweet love and cuts off her wings, leaving her bereft, a victim.

How sad. How tragic. What a victim she is. No wonder she grew up to be such a…unpleasant fairy creature.

In the movie, that man is…the future King Stephan.

It is Geppetto all over again.

Big-hearted Geppetto cannot be kindly, he has to be an evil mastermind. Good-hearted King Stephan cannot be innocent, he has to be the cad who screwed over the future villainess.

In modern stories, good men become cads and creeps so that the bad people, like Malificent and the Big Bad Wolf*, can be misunderstood, pathetic.  What effect do these changes have on the story? They mitigate the wickedness. If the villain is now a victim, then the villainy is now justified. “It wasn’t her fault. She was abused first.”

Suddenly, her blackness…is not so black.

* (Okay, I actually like Big Bad. He’s my favorite Fable character, but I like him because he’s a noir detective type like Sam Spade. He has nothing in common with the character from the fairy tales who eats grandmothers and pigs.)

Conversely, making the innocent man into the villain, as with Geppetto and King Stephan, sullies the goodness of the character — and of the original work! The original story now seems less realistic, less signficant, less important, especially to members of the audience who come upon the modern version first.

Suddenly the purity of the innocent is stained; the whiteness is no longer so white.

The Degenerati mitigate the bad and lower the good They try to “level the playing field,” make everything flat and uninteresting. They pretend good is bad, and bad is…not so bad. All majesty is removed from the characters, and without majesty, there is no awe. 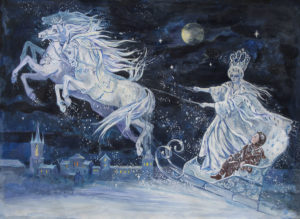 The awesomeness that is the Snow Queen

Because we can’t have awe.

It might accidentally remind someone of the Source of All Awe.

And that, folks, seems to be – strange as this may seem – the real issue. Noble qualities, even in villains, are still noble qualities. And modern stories don’t want those. They want scum, and they want victims.

Scum and victims are not perilous.

And if there is no peril, then there can be no heroism.

Next Up: Our Conclusion: The Secret of the Perilous Wood

31 thoughts on “Defending the Wood Perilous — Part Four: A Disgrace to the Forces of Evil!”