This is a repost of an article by an author with the excellent name of William WIldblood. 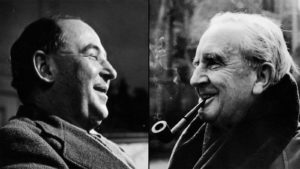 A sentence in John Fitzgerald’s recent post set me thinking. He wrote “The body of work left behind by the Inklings has helped re-mythologise the world and baptise the contemporary imagination”. I haven’t read much by any of the other Inklings and I hadn’t even heard of them when growing up, but that sentence sums up the effect that Tolkien and CS Lewis had on me as a child. I’m sure they had a similar effect on countless others too. Indeed, I sometimes think that without them (and a few others but them principally), children growing up in the mid to late 20th century would have been left almost completely spiritually bereft.  Most of us had very little exposure to real spiritual truths and what we did have seemed formal and remote. But the stories of these two writers brought the spiritual world alive and did so (and this I think is very important) in a way that not only opened up the imagination but was also Christian.  The world was re-enchanted and done so in the light of Christ.

Modern Christianity often seems like a fire that has burnt itself out. Whether that is because of the paucity of real saints (saints are the lifeblood of any religion) or because it has lost touch with its roots or because it has become infected with social and political ideologies or because it is now more concerned with the letter than the spirit or because it has desacralized itself or because it frequently denies the truth and power of its own mythology and symbolism or because it has severed its connection with the imagination or because it focuses too much on this world and not enough on the next, is almost beside the point. (Actually all these things are linked). The fact is it has lost its glowing and full-bodied colours of yore, its sense of being lit from within, and become a black and white thing of two dimensions. And with its truth attacked from the outside and its vitality sapped from within, as well as a tendency to accommodate itself to what is trying to destroy it, it is now in many ways a faint shadow of its former self.

But, as John Fitzgerald pointed out, Tolkien and CS Lewis helped revive Christianity by re-establishing it in the world of the imagination. The former covertly, the latter more obviously but they both did it and they did it in a way that many people either didn’t notice or didn’t much care about if they did, thus getting beneath the prejudices instilled in the modern mind. Furthermore they brought back a sense of Tradition which after the Second World War appeared to have been completely abandoned by all the clever people intent on building their soulless world of modernity. I mean by Tradition a connection to real things, both natural and spiritual, that humanity had established over centuries but which was in danger of being swept away by those, more or less the entirety of the intelligentsia in the West, who preferred ideology to truth.

Running parallel to this idea of the restoration of poetry and imagination to religion was something else. Both Tolkien and Lewis recognized the reality of evil and taught the necessity of fighting it. In a way that’s what their books were all about. At the time they were writing even many Christians were embarrassed by the idea of the devil, preferring to see good and evil in terms of impersonal psychological principles. But our two writers knew better and in this, as in many other ways, they were prophets. Now anyone who is serious about trying to understand the spiritual world knows that dark forces, demons, call them what you like, exist and have tremendous power in this world which must be resisted. They cannot be compromised with. The best way to fight them is through handing oneself over to God and doing his will but this is not a passive thing as it was not for Gandalf or Frodo or any of the sons and daughters of Adam sent into Narnia to help restore it when things were going badly. It requires trust and hope and love of the good, and soldiering on doing one’s duty as Frodo and Sam did even when all seems lost. Pacifists don’t fight and they don’t win either. Obviously I’m not saying that one should never turn the other cheek but resist not evil does not mean giving way to it.

I said they were prophets. Much of what Tolkien and Lewis wrote can be seen to apply to the present day demonic assault on mankind. I’m thinking of Saruman and the Scouring of the Shire (already started in Tolkien’s day but now everywhere and seemingly irreversible) or even the whole of The Lord of the Rings, and, in particular, The Last Battle and That Hideous Strength. The Ring can be many things but it is certainly not inappropriate to relate it to modern computer technology which gives us great power but at what inner cost? I also regard the depiction of a small band of men and women of true hearts and good will working with the inner powers against the demonically inspired forces of a corrupt Establishment, as depicted in That Hideous Strength, to have more than a touch of truth to it.

I wrote in an email to Bruce Charlton that these men were probably saints but that they, especially Tolkien, would almost certainly reject that title and look with extreme displeasure on any fool who gave it to them. Well, they’re not here to do so and I don’t suppose they care from where they are now. But if saints are those who faithfully carry out the will of God and work for him on this Earth then I don’t see why not. These two men performed a great work and are surely responsible for bringing many people to and, just as important, keeping them in the way of Christ over the last half century or so. They re-illuminated a light that was in danger of going out and did so in a way that inspired millions. In their stories, and in the case of Lewis, his religious writings, they not only provided lifeboats for sensitive souls drowning in a sea of atheistic materialism, they also gave us spiritual weapons to fight ignorance and evil. My, at the time, 9 year old son said to me a few years ago that The Lord of the Rings seemed more real than reality, and, of course, it is because it better reflects the truth in reality than what passes for reality in this world now.