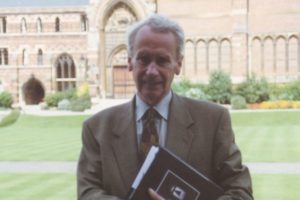 Somehow I assumed that Christopher Tolkien was much younger, but maybe I just formed that image a long time ago. Regardless, it’s sad to hear of his passing.

Outside of his father, the famed J.R.R., Christopher is probably the one most responsible for all things Middle Earth. He compiled his father’s notes and works into coherent wholes; without him, there would have been no Silmarillion, let alone any of the other works from Tolkien we’ve received since his father’s death in 1973.

He’s also been a driving force in the amount of respect Tolkien’s legacy has been treated with; here’s to hoping it wasn’t just him protecting Middle Earth. I can already feel Disney circling in for the kill.

Added by L. Jagi Lamplighter — Our prayers go out to the Tolkien family at this time.