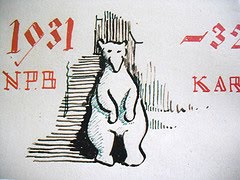 In 1927, John Livingston Lowes published The Road to Xanadu: A Study in the Ways of the Imagination with a revised edition following in 1930. He traces the “caves of ice” in Coleridge’s “Kubla Khan” (lines 36, 47) to William Bartram’s Travels through North and South Carolina, Georgia, East and West Florida, the Cherokee Country, the Extensive Territories of the Muscogulges or Creek Confederacy, and the Country of the Chactaws. Containing an Account of the Soil and Natural Productions of Those Regions; Together with Observations on the Manners of the Indians (1791), by way of a note of Coleridge’s of “an Image of Ice” in “a cave in the mountains of Cashmere” (pp. 379-80). 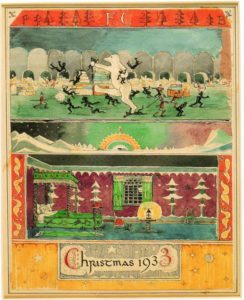 I do not know if Tolkien had read this, or was thinking of Coleridge, but in his 23 December 1932 letter to the Tolkien children, Father Nicholas Christmas recounts in his own shaky hand the adventures of his helper, the North Polar Bear (NPB), in “the caves (belonging to Mr Cave Bear, or so he says) not far from the ruins of my old house” (largely destroyed in 1925 when NPB brought the North Pole down on its dome, but ravaged further the following year when he messed with “the tap for turning on the Rory Bory Aylis fireworks” – “still in the cellar”, there – releasing “all the Northern Lights for two years in one go”). And he illustrates the letter (far from shakily) with reproductions of cave paintings there (not a little resembling renderings of more southerly ones by Abbé Henri Breuil), noting Cave Bear says “the bears first had the idea of decorating the walls, and used to scratch pictures on them on soft parts” – though later “Men came along”: “Cave Bear says there were lots about at one time, long ago, when the North Pole was somewhere else.” What astonishing eye-witness Polar revelations: caves in stone underneath the snow and ice of the North Pole. A Pole, if Ursine tradition can be trusted (for “That was long before my time, and I never heard old Grandfather Yule mention it even, so I don’t know if he is talking nonsense or not”), which was previously “somewhere else”.

In his delightful Tolkien at Exeter College (2014: p. 8), John Garth suggests that in 1911 the young Tolkien “may have enjoyed knowing that, nearly a century earlier the father of modern geology, Sir Charles Lyell, had also read classics at Exeter College.” Now, Lyell (as Garth may have been thinking), in 1872 had written, “Continents […] although permanent for whole geological epochs, shift their positions entirely in the course of ages”. And, as it happens, that recurring idea, already a controversial one for some 80 years, the idea to which Alfred Wegener had given the name ‘continental drift’, was just being championed again in 1931 by Professor Arthur Holmes of Durham University.

Was Mr. Cave Bear espousing this, in his own way, just then, as well? Whether Men had added their paintings to the caves and these had then drifted north, or not, something perhaps relevant to that Polar bedrock had been publicly bruited about in years gone by. For, down the centuries, there are various witnesses that (as Hakluyt puts it in his translation of Gerard Mercator) “in the yeere 1360, a certain English Frier, a Franciscan, and a Mathematician of Oxford,” travelled to islands in the far North inhabited by descendants of people King Arthur had settled there, “and passing further by his Magicall Arte, described all those places that he sawe”, including the island at the North Pole, in a book now lost. Peter Heylyn notes that Oxonian’s report of an Arctic island “inhabited by Pygmies, the tallest of them not above four foot high”.

Now, we know how Tolkien later (Letter 239) told of abandoning the name ‘Gnomes’ in his work on Middle-earth “since it is quite impossible to dissociate the name from the popular associations of the Paracelsan gnomus = pygmaeus.” But, by 1932, Father Christmas had told the Tolkien children about the “Snow-elves” (1929) and now told them about “the Gnomes” including “the Red

Gnomes” already there “somewhere about Edward the Fourth’s time” (1461-70, 1471-83), Gnomes who are the “greatest enemies” of the “goblins”, whom they had helped clear out “about 1453” – with the letter’s envelope inscribed “By gnome-carrier”. Might Father Christmas be telling more about the true identity of these ‘pygmy’ northern Gnomes and the true nature of that solid Polar earth, seen by that old travelling Oxford scholar? The height of “some children of the Red Gnomes”, at least, is shown in a 1932 painting, though that of the Red Gnomes themselves (seeming equally – if not more – diminutive) must await 1933.

Tolkien might have said of his Polar region in these letters something like what he later said of Middle-earth in The Lord of the Rings (Letter 187), “Having geological interests, and a very little knowledge, I have not wholly neglected this aspect, but its indication is rather more difficult – and perilous!” Whether he would have been rereading older Father Christmas letters as he worked on his 1936 one, and so have mysterious continents that much the more in mind, as “the Númenor idea arose between 5 and 8 December 1936, or in the days immediately following” (to quote John Garth), are intriguing questions.

Illustrations by Tolkien, from his Father Christmas letters.

The Wikipedia articles, “Inventio Fortunata” and “Rupes Nigra” are interesting, here, not least for their illustrations and links, while B.F. De Costa offers a convenient (if in many ways startling) overview with quotations in Inventio Fortunata: Arctic exploration with an account of Nicholas of Lynn (New York, 1881), conveniently scanned in the Internet Archive. Edward Watson has a very interesting collection of posts at his blog, Clas Merdin: Tales for the Enchanted Island, gathered together under Arthur in the Arctic (linked at the top of its Home page).

The quotation from Charles Lyell is from Principles of Geology or The Modern Changes of the Earth and Its Inhabitants Considered as Illustrative of Geology (London: John Murray, 1872), p. 258 as scanned in the Internet Archive and linked in the Wikipedia article, “Continental drift”.

The quotation from Richard Hakluyt is from Principal Navigations, Voyages, Traffiques and Discoveries of the English Nation, ed. Edmund Goldsmid as transcribed on the University of Adelaide website. The quotation from Peter Heylyn is from Gosmographie [sic], The Fourth Book: Part II Containing the Chorography & Historie of America, And all the Principal Kingdoms, Provinces, Seas, and Islands of it (1656) as found in ‘microform’ in the Internet Archive.

The quotation in the last paragraph comes from John Garth, “When Tolkien reinvented Atlantis and Lewis went to Mars” (31 March 2017) on his website.

The Letters of J.R.R. Tolkien, selected and ed. Humphrey Carpenter with the assistance of Christopher Tolkien (Boston: Houghton Mifflin, 1981).