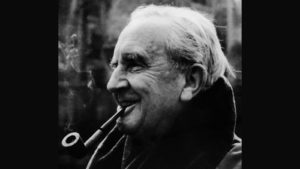 Tolkien’s remarkable creative method has been elucidated by TA Shippey in his Road to Middle Earth; and amply confirmed by the evidence from the multiple volumes of The History of Middle Earth (HoME) edited by Christopher Tolkien. What happens is that Tolkien treats his ‘first draft’ as if it were an historical text of which he is a scholarly editor. So when Tolkien is revising a first draft, his approach is similar to that he would take when preparing (for example) an ‘edition’ of Sir Gawain and the Green Knight, or Beowulf. 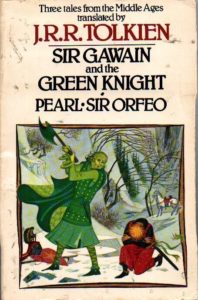 Thus, as Tolkien reads-again his own first draft, he is trying to understand what ‘the author’ (i.e. himself) ‘meant’, he is aware of the possibility of errors in transcription, or distortions that may have occurred during the steps of historical transmission. He is also aware that ‘the author’ was writing from a position of incomplete knowledge, and was subject to bias.

This creative ‘method’ leads to some strange compositional occurrences. For example, in the HoME volume The Return of the Shadow (covering the writing of the first part of The Lord of the Rings – LotR) Tolkien wrote about the hobbits hiding from a horseman who stopped and sniffed the air. The original intention was that this was to be Gandalf, and the hobbits were hiding to give him a surprise ‘ambush’. However, in the course of revision, the sniffing horseman became a ‘Black Rider’; and the hobbits were hiding in fear of him. The core incident remained but its significance was inverted.

Furthermore; the nature and intention of the Black Riders was originally a mystery to Tolkien; only later, over the course of many revisions and as the story progressed, did these horsemen develop into the Ringwraiths, wearers of the Nine Rings, and the most powerful servants of Sauron. 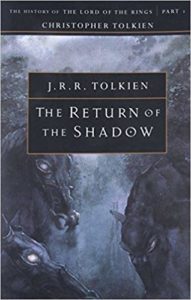 This is a remarkable way of writing! It think it probable that most writers know what they mean in their first draft, and in the process of revising and re-drafting they try to get their expression closer to that known meaning. But Tolkien did the reverse: he generated the first draft, then looked at it as if that draft had been written by someone else, and he was trying to decide what it meant – and in this case eventually deciding that it meant something pretty close to the opposite of the original meaning: with hostile Nazgul substituting for friendly wizard; hiding for ambush.

In other words, Tolkien’s ‘original intention’ counted for very little, but could be – and was, massively reinterpreted by editorial decisions. The specifics of the incident (rider, sniffing, concealed hobbits) stayed the same; but the interpretation of the incident was radically altered. This pattern is often seen throughout the HoME – specific details are retained, while the meaning of these is transformed throughout the process of revision. By contrast, I suspect that most authors maintain the interpretation of incidents throughout revisions, but change the specific details.

This sequence corresponds to the transmission of texts through history – specific and striking incidents tend to be remembered and preserved – while (due to historical changes in culture, assumptions, background knowledge etc) these incidents get hugely re-interpreted in ‘anachronistic’ ways. So the incident may stay the same, but its meaning may be reversed. 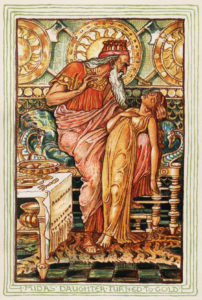 I have seen this with a couple of folk tales during my life. When I was a child, King Midas – everything he touched turned to gold – was regarded as a cautionary tale of greed leading to (potential) death, since food and drink were also turned to metal. But nowadays, the Midas Touch is regarded as something desirable – it means the ability always to make money in every situation. Presumably the benefits of wealth are now regarded as greater than mere life!

“Shooting yourself in the foot” used to mean a deliberate act of self-wounding with the aim of being invalided away from the front line of a war. Someone shot themselves in the foot on purpose, but pretended it was an accident. But it now means almost the reverse – an accidentally self-inflicted wound; such as when a politician makes a ‘gaffe’ during a press conference, and ends-up being sacked.

In both cases a striking image (the gold-transforming touch, the firearm discharged at the boot) is preserved, but its meaning is transformed.

Tolkien’s compositional technique recognizes this process – and Tolkien approached his first draft of composition as if the draft were the end product of this type of misinterpretation or distortion. So, his draft containing the striking detail of the ‘sniffing rider’; but it is as if Tolkien assumed that the meaning of the detail had been misunderstood by one or more of the copyists and clerks via whom the text had been transmitted to Tolkien.

But why did Tolkien write in this way? I think there are two reasons. The first is that he was by profession a philologist: a scholarly editor, a man concerned with old and fragmentary and distorted texts – and he brought this skill and perspective to his fictional writing.

But secondly it relates to Tolkien’s creative processes. This relates to the key question – ignored so far: How did Tolkien arrive at his first draft? And this is where the ‘shaman’ aspect of the title comes in. Because Tolkien’s way of arriving at a first draft could be described as ‘shamanic’. 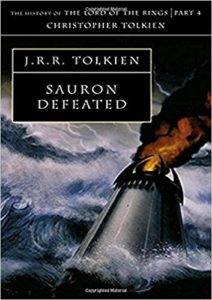 Shaman is a term used to describe spiritual practitioners of tribal people that do their work in a state of altered consciousness – such as trances, fasting, frenzies or lucid dreaming. By calling Tolkien shamanic; I mean that much of Tolkien’s primary, first-draft creative, imaginative work was done in a state of altered consciousness – either an awake ‘trance’ state or using ideas from exceptionally clear and memorable (sometimes recurrent) dreams. The altered state generated the first draft; then re-writing was done in normal everyday ‘clear consciousness’, with his full critical faculties brought to bear.

Clues to this being Tolkien’s practice are scattered throughout his biographical material; but I became aware of it particularly when studying the disguised autobiographical aspects of The Notion Club Papers (in Volume 9 of HoME, Sauron Defeated). There are descriptions of lucid dreams, detailed visions of history, overpowering imagination, hallucinations of mysterious languages, ghosts, psychokinesis (knowing the history of an object by touching it) and many other altered states of consciousness and ‘paranormal’ experiences. The supporting notes by Christopher Tolkien link several of these fictional descriptions to JRRT’s real life incidents and experiences.

This combination of first creating a dreamlike first draft, then using it as the basis for scholarly and meticulous revisions, is not unusual among creative people, perhaps especially poets. Robert Graves wrote about the ‘poetic trance’ a great deal; and Graves’s ideas of proleptic (historical) and analeptic (predictive) thinking were what enabled him to ‘inhabit’ imaginatively, and he would say in reality, another time and place: that is, to be an inspired prophet.

The first draft – if it truly has been inspired – is interpreted as coming from elsewhere, beyond the mind of the artist; for instance coming from divine sources, from ‘the muse’, or perhaps from the creative/ collective unconscious. At any rate, the job of the alert and conscious mind of the artist is to ‘make sense’ of this inspired material without destroying the bloom or freshness deriving from its primary source. In this respect, and others, Tolkien wrote more like a poet than a novelist. 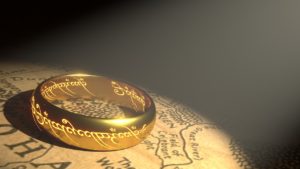 This is, I believe, the psychological basis of the fact (often cited) that Tolkien did not see himself as inventing, rather as discovering. He was not consciously inventing his first drafts but rather ‘transcribing’ material which came to him during altered states of consciousness, by a process of inspiration which was not under his control. When revising this primary material, if he found that key evidence was missing, he could try and interpolate it like a historian by extrapolation from other evidence, linking between the inspired material; or he could await further poetic inspiration to be validated by intuition. Sometimes he did one, sometimes the other.

This interpretation is also consistent with Tolkien’s oft-stated remark that the essence of his Legendarium originally came from the languages he had made – what became called Quenya and Sindarin. I think he meant that words were often primary data, attained in an intuitive trance state; and these words required to be understood. This is where his professional philology and his spare-time creative writing fused.

For example, Tolkien came across the Anglo Saxon word Earendil in a poem called Crist. Then, over the decades as Tolkien’s Legendarium evolved, the meaning of Earendil (the myth behind the word) gradually changed – as Tolkien ‘learned’ about the history of Middle Earth – but the same word remained (although subtly re-spelled; since philologists are .

Or, if we read the early Lost Tales (written during the First World war) and through the drafts of the Silmarillion over the next forty plus years, we can observe that the meaning of the Beren and Luthien story changed. For instance, Beren was originally an elf; but later the special significance of the story was that Beren was the first mortal Man to marry, and have children, with an immortal elf-maia. Yet the key ‘first draft’ detail of Luthien dancing for Beren among the flowers in the woods remained constant – and this was based on a real life magical experience of Tolkien with his wife. In this case; the shamanic state of altered consciousness was, apparently, a shared one. 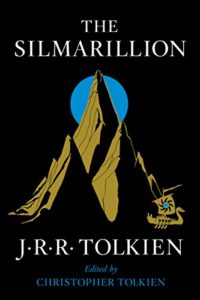 A further well known example is Tolkien’s recurrent ‘Atlantis’ dream of a great green wave, rolling over the land – a dream which independently also occurred for his son Michael. This primary image, from an altered conscious state; was eventually embedded into the complex Silmarillion narrative of Numenor and its downfall, and the dream itself was given to Faramir in The Lord of the Rings – as well as being discussed by the Inklings-like club members in the (unfinished) Notion Club Papers

Tolkien regarded key words, images and story elements that came to him in ‘shamanic’ states as his primary source material. The interpretation of these emotionally-charged, entities might change, might even reverse; but the entity should be kept the same throughout all these changes, because that element was what had been ‘given’ to Tolkien during the altered consciousness of his most profound creative states.

Given to Tolkien by whom? …it might be asked. Well, insofar as these primary story elements were true and good; Tolkien would have assumed that they came as a gift of God. And this, I think, was the deep reason that such story elements absolutely needed to be preserved throughout even decades of revisions.

6 thoughts on “The shamanic creativity of JRR Tolkien”