Article by Donald Williams from a blog called The Five Pilgrims, July 10, 2017 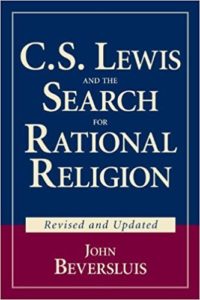 Surely one of the most controversial books in the history of Lewis studies was the first edition of John Beversluis’s C. S. Lewis and the Search for Rational Religion, originally published by Eerdmans in 1985.  Billing itself as the only book-length critical study of Lewis’s rational apologetic for Christian faith, it concluded that none of his arguments succeeded.  Reviewing the first edition in Mythlore 43 (Autumn 1985), Nancy-Lou Patterson called it “as waspish a work” as it had ever been her “disagreeable task to review,” concluding that the faith, “including its reasoned elements” would survive the book (42).  Patterson was right: the first edition sometimes gave the impression that Beversluis thought accusing Lewis of a fallacy was equivalent to demonstrating that he had committed it.  Few readers who had appreciated Lewis’s apologetic works were convinced by Beversluis’s arguments.

Now we have a new revised, updated, and expanded edition.  It has already caused much exultation on atheist websites and much dismissive eye-rolling among Lewis fans.  Neither reaction is justified.

Beversluis has responded to his critics, continued his own thinking, and rewritten each section to the point that this version is almost a completely new book.  In the process, he has strengthened his presentation considerably.  While in the end I still find it mostly unconvincing, it does keep its promise to provide the strongest sustained critique of Lewis’s apologetic on the market.  As such it performs a valuable service.  Those who wish to continue using updated versions of Lewis’s arguments for Christian theism will have to get past Beversluis in order to do so with credibility, and their arguments will be stronger for the exercise.

Beversluis sets out to take seriously Lewis’s statement in Mere Christianity that he does not ask anyone to accept Christianity “if his best reasoning tells him that the weight of the evidence is against it.”  Beversluis approves of Lewis for demanding evidence and wants to know if he has succeeded in showing that the best reasoning supports Christian faith.  Beversluis concludes that Lewis’s own best reasoning fails to do so.  While he examines several of Lewis’s arguments—the argument from desire, the moral argument for theism, the “trilemma” argument for the deity of Christ, the argument from reason for the self-refuting character of naturalism, Lewis’s theodicy, etc.—in great detail, his objections can be summarized in two points.  First, the “apparent cogency of [Lewis’s] arguments depends on his rhetoric rather than on his logic” (20).  Lewis was such a good writer that people are carried away by his words and do not notice the fallacies being committed under their cover.  Second, Lewis’s arguments are fallacious, and his besetting fallacy is the False Dilemma.  Lewis will say that there are only two (or three) choices, refute one, and thus seem to leave Christian theism standing in sole possession of the field; but in reality, there are other alternatives he has not considered, and the one he is rejecting is a straw man.

It should be immediately obvious to Beversluis’s readers that his first criticism of Lewis is valid only if, and only to the extent that, the second is upheld.  It is hardly a fault to write well unless that writing can be shown to be in the service of error.  The details of the second criticism will likely be debated in the journals for some time.  The question will be whether the additional alternatives Beversluis tries to posit do not in fact ultimately reduce to the set of choices that Lewis’s more incisive analysis had set before us in the first place.  In most cases, I believe that they do.