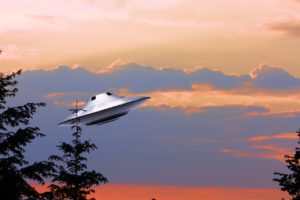 My official involvement with the paranormal began over twenty-five years ago when I received a police call to investigate a UFO. This was before ‘The X-Files’ and before anyone could be identified on a police band. I received a chorus of jokes ranging from the theme songs to ‘The Twilight Zone’ and ‘The Outer Limits’ to more earthy advice about avoiding probes of various kinds.

Unfortunately for fans of UFOs and all things paranormal, there was no UFO on the scene when I arrived. The case was given the careful consideration it was due and was cleared as HBO (handled by officer) and listed as GOA (gone on arrival). Back to Alpha Centauri, no doubt.

A couple of officers mentioned it, then it was promptly forgotten. Except by my wife who later staged a UFO crash on our dining room table. She included a good-sized UFO that had been in a fender bender, a series of strange flashing lights, and caution tape. That is true dedication and love.

A decade later, I was working on a reservation where my grandfather had worked before me and my son worked as a police officer after me. It is not the reservation our family is from, but we’ve spent a lot of time getting to know the people and culture for generations. 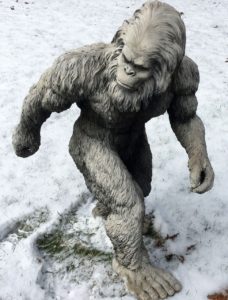 One of the traditions that the tribe believed in was several supernatural creatures. Some would be called spirits, but others were would we would call fairies or elves. Bigfoot was my favorite, and the one we were most called to deal with.

The elves on the other hand were pretty much like the fairytale creatures my Norwegian grandmother told stories about (with minor differences) and the ones my Irish family believed in. Elves appear to be a common element in every culture I have run across.

There are several common elements but the most common for those who truly believe is caution or even fear. Remember bigfoot, giant, lovable, funny commercial, tv shows, and movies bigfoot? Yeah, not so much. The people who grow up believing in him, (and I do not mean the new age hippie-dippy types that spend a weekend banging on trees) fear him. They have plenty of cautionary tales about bigfoot and avoid him. In fact, the reason I fell in love with the hairy giant was that police calls dropped dramatically while he was around.

Once a rumor got started that bigfoot was out and about, crime dropped like a rock. Nobody was vandalizing anything, no gas was siphoned using an ‘Oklahoma credit card’, nobody got in a fight with her husband or with the neighbors. A vibrant busy community turned into a quiet little hamlet with people off the streets well before dark.

The Cannibal Ogress was good for that, too. I will not give here, her proper name as I do not want to ‘dox’ the community. And nobody likes naming cannibal ogresses. That’s just asking for trouble.

I heard about her when I was a kid visiting the community, but I did not believe in her like the kids born and raised there. Fifty years ago, when mom said it was getting dark or the cannibal ogress was going to get you, you came inside. Oh sure, a few brave boys would hang out for ten minutes but once their toughness and bravado were established, they would find a reason that it was time to go inside. I loved that cannibal ogress as a police officer.

The most interesting, elusive, and potentially dangerous creature was the smallest. This little elf was just as fervently believed in. He was given his haunts, habits, and preferred victim group (young children), and he had an established method of luring children away from parents and into the deep woods never to be seen again.

This little guy could not make tools except out of wood. He would whistle instead of using proper speech like a human, and he jealously guarded what was his. His description, (knee high, black hair, saffron skin) is similar to some of the little guys my Norwegian grandmother warned me about. Except the julenissen could bring you presents unlike his more common cousin who hated lazy farmers (and little boys). This other elf was unpleasant all day. Nobody ever told me a nice story about them.

This leads me back to bigfoot. When somebody got into trouble with the little elves, they generally kept it to themselves or their family and did not involve the police unless a person was lost. Bigfoot on the other hand, he’s scary enough that nobody minded calling about him. Of course, we received calls about him all the time when he was around.

Something broke into the hatchery? Bigfoot. 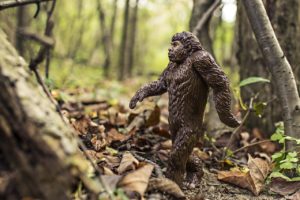 Garbage cans knocked over and rummaged through? Bigfoot.

Something snatched a dog right out from his spiked leather collar leaving nothing but hair and blood behind? Bigfoot again.

I could have organized an entire task force around the number of calls we received for the elusive giant. He was never actually arrested although I have no idea how many calls featured him as a prime suspect. He is still to this day haunting that community when the season is right.

What is different about our elves? Belief. If you do not believe in elves, if you make them the subject of light-hearted fantasy fare, you really do not understand the fundamental nature of the creature. It is like all the authors that make vampires the seductive and entirely safe (but still the edgy bad boys) protagonists suitable for a modern romance novel. They are cartoons of their once feared menace.

For those who believe in their bones about elves, fairy creatures, and the supernatural, elves are frightening. Easily as scary as ghosts, hobgoblins, or vampires. People who believe take precautions to avoid them including not speaking their names or attracting their attention.

Some modern authors have gone back to making elves the scary, unpredictable and malevolent creatures that haunted our ancestors. It is a deep vein to mine, and it is nowhere near ‘played out’. So, mine that gold. There is literally thousands of years of folklore, myth, and fairytales that are waiting to be rediscovered.

And bigfoot? Well, I am past the days where I can arrest anybody or anything. I cannot even slow down my grandchildren when they run across the yard. But bigfoot is still out there committing depredations every year, and it falls to my son to chase and arrest the big guy. I hope he has better luck, and as much fun as I did chasing bigfoot thirty years ago.

2 thoughts on “Arresting Bigfoot Or Our Elves are Different!”